The founders of Marin Skincare first learned about the healing properties of lobster while in graduate school at UMaine for biomedical engineering.
PORTLAND, Maine — A fresh catch could help battle the rash that browntail moth caterpillars can spread this time of year. Two scientists in Maine have developed a lotion that they say eases dermatitis, and its main ingredient comes from one of Maine's most popular things to eat: lobster.

Amber Boutiette and Patrick Breeding founded Marin Skincare, as Boutiette struggled with her own eczema battle.

"While in graduate school at UMaine for biomedical engineering, we met Dr. Bob Bayer, a lobster scientist researching a glycoprotein found in lobster that allows [a] lobster to fight off disease, heal wounds, and even regenerate limbs," the two share in their story on their webpage. "He discovered in the same way the glycoprotein helps lobster regenerate limbs, it could actually help repair the skin barrier."

The website write-up goes on to read, "After trying everything and seeing some in vitro data from the lab, we said 'what the heck' and decided to try a glycoprotein-rich formula on Amber's skin. After patch-testing to make sure it was safe and non-irritating, she began using the prototype cream on her entire body, face, and eyelids."

Boutiette and Breeding continue to study the healing effects of this lobster glycoprotein, partnering with a lobster processor in Saco to extract it for their face/body cream.

"We partnered with Luke's [Lobster] because he has multiple times been supplier of the year with Whole Foods, so he makes sure to handle the lobster in the most sustainable and ethical way possible," Breeding said. "He knows all the fishermen catching the lobster."

The lobster is already being processed to ship all over the country as food, but the protein was just excess going down the drain. This partnership helps both parties and cuts back on waste, Breeding said.

"The lobstermen will put it on, we've seen it multiple times, they'll put it on and be like, 'Ha! This stuff's pretty good,'" Breeding joked.

Marin's first employee is also a fan of the cream, which she said cleared up her eczema and changed her life.

"I took a shower, put it on my entire body face hands whole body, and I immediately was like, 'Wow. It's not stinging anywhere, it's not itchy, it just feels amazing,'" Allie Alfonso said. "I told my mom immediately we're going to need more."

RELATED: 101-year-old Maine woman may be the oldest person in the world still lobstering

Alfonso reached out to Marin Skincare and shared her story, and also shared her story on her Instagram showing her real, unfiltered face of eczema. Breeding and Boutiette talked with Alfonso for a few hours, then asked if she wanted a job with them helping them create a community for those suffering from eczema.

"I graduated college and moved to Maine within a week. I had never been here before, I found an apartment, hadn’t even looked at it in person and it was like, this just feels right like it’s what I'm meant to do," Alfonso said. 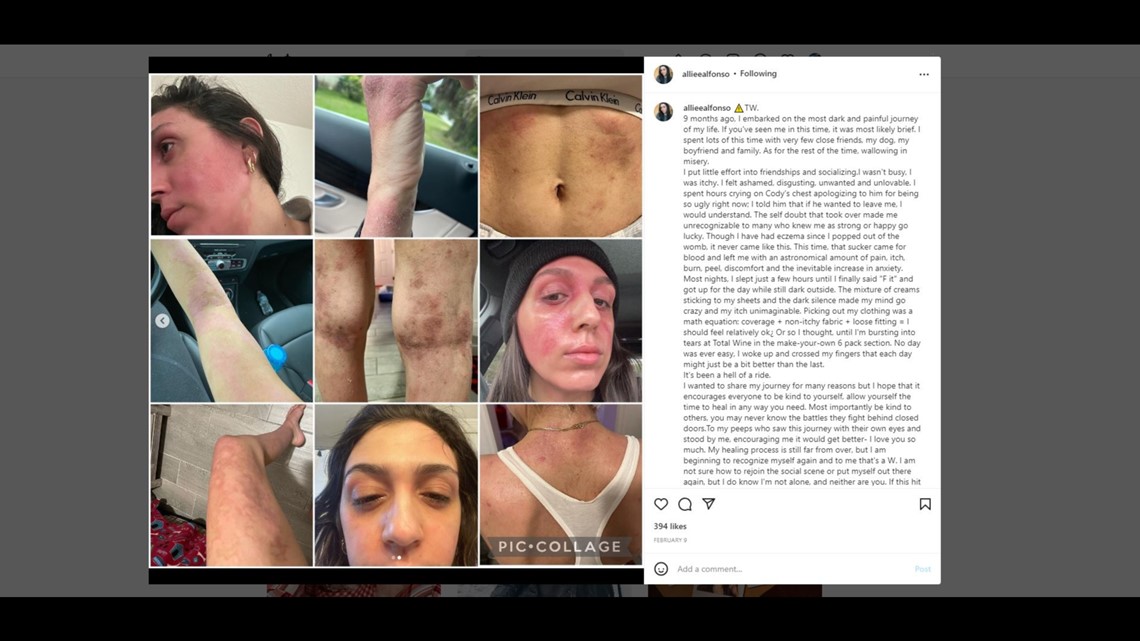 Breeding and Boutiette said their cream can be used on any part of the body, including the face, and helps repair the skin barrier affected by many different things: psoriasis, shingles, sunburns, and even the rash caused by the browntail moth caterpillar.

"Turns out the browntail moth rash is actually a form of dermatitis. It's contact dermatitis, which is eczema," Boutiette said.

"Last year it was crazy, it was the worst browntail moth caterpillar season ever and everything was sold out from the steroids to the ingredients to DIY remedies, there were no more solutions," Breeding said. "I think people just grabbed our product as a last resort and it turned out to help better than the other things that we were using. And it's better for you because steroids often caused more harm to the skin than good."

Marin Skincare can be found online and in retail stores such as Nathan's Pharmacy in Boothbay Harbor and Toad and Co. in Freeport.